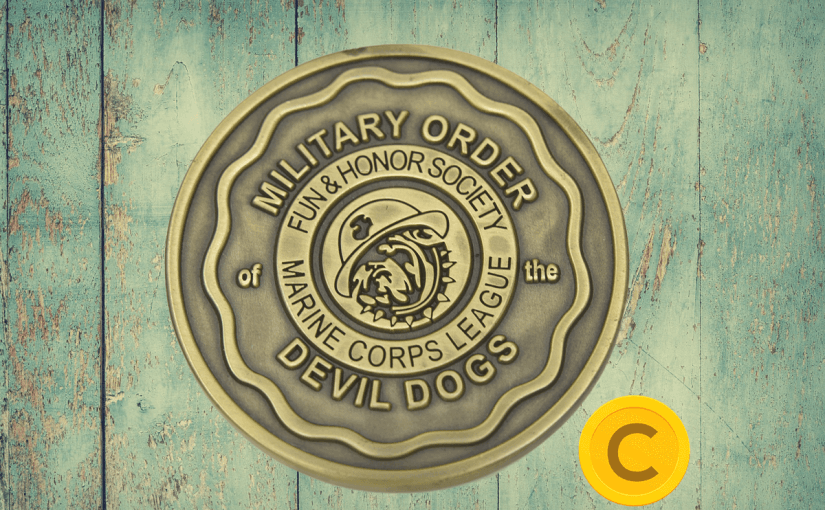 When Is It Appropriate To Give A Custom Challenge Coin?

Want to give away your own coins or award custom challenge coins? Learn about when it’s appropriate to bestow such an honor.

Custom challenge coins have a long history in the United States.

Once relegated to the military as a reward for a service member’s hard work, these coins are becoming popular items to award to employees for good work.

These coins can be a comfort for the recipients. And their families.

One of the hardest parts about custom challenge coins though is finding the right way and time to award these coins to your employees or members.

Being recognized for your hard work is a great feeling and 70% of surveyed employees believe their work being meaningfully recognized “had no dollar value.”

Employees are motivated and engaged when they are praised for work well done.

One way to recognize your employees for the hard work they do for you is by presenting custom challenge coins. Coins created for well-performing employees gives your team a goal to work towards. And something to memorialize the completion of a complicated project.

Keeping your employees engaged and boosting their morale is a great reason to have a challenge coin in your back pocket.

The origins of custom challenge coins are rooted solidly in our military’s history.

Service men and women have been awarded custom coins for decades now. And these coins are often considered parts of the identities of their owners.

Coins were often handed out as praise for exemplary service. But they’re also a solid, physical source of morale boosting. These coins help teams bond. You don’t have to be on the workforce to suffer from low morale when a project isn’t going to plan.

Many businesses are adopting the military’s method of praise and reward. Coins don’t have to be presented during a large ceremony. Improving your business’s overall morale can be as simple as handing the coin off with a handshake.

Commemorate a Special Moment in Time

Challenge coins are used to commemorate a special moment or achievement. They are a physical reminder of a milestone a person has been striving towards for a while.

There are many organizations that use custom coins. Or chips.

Many temperance organizations like Alcoholics Anonymous have used custom coins to commemorate certain events. Or achievements. Sobriety coins are a great example of customized coins even though the AA logo is not allowed to be used on the medallion.

These coins or chips may not be official AA items but they are still presented at meetings. They are a very important part of the sobriety organization. And a physical reminder of the recipient’s important sobriety milestones.

The “chip system” has been around since 1942 and some believe it was started in Indianapolis. There are many kinds of coins. There can be 24 hour medals. And months ranging from 1-11 or 1-65.

These chips or coins are a “celebration of time” that recipients have taken part in the AA culture. Even though the coins are not officially part of Alcoholics Anonymous.

Challenge coins have long been popular with military servicemen. This tradition has continued on with many of them leaving the military and joining services like the police force.

Law enforcement challenge coins are morale boosters for police officers and their units. These coins are not presented in the ceremony. Often they are handed off by a unit commander with a simple handshake.

These coins are used to commemorate events and projects. And often times bind units together.

Custom challenge coins are a great way to commemorate the pride our community has in our law enforcement and civil servants.

Challenge coins are popular among the military but they have seen an increasing popularity among other civilian organizations.

The original founding members are all veterans. They have served in the Marines and the National Guard and when they were creating the Legion they wanted to find a way to commemorate their organization. And their service.

So the Legion Challenge Coins were born.

These coins are presented to new members in brief welcoming ceremonies. They are created when a new character is introduced to the franchise. They can commemorate events. And fundraising milestones.

Many members have hundreds of these coins. And they carry multiple coins with them to each event they go to.

They are traded fiercely and are one of the defining features of the charity organization.

The Boy Scouts is another example of a civilian organization that uses challenge coins to reward and commemorate.

These coins are awarded when scouts move up through the ranks. When a scout becomes an Eagle, parents will sometimes present them with custom coins during the ceremony as well.

These coins are usually quite collectible.

And are obviously cherished by their owners.

Most organizations opt for simple handoffs when it comes to presenting their challenge coins.

Many people do not like having attention called to them. Some servicemen say their coins were simply given to them after a handshake from their commanders. While most people like being praised for their work, the fanfare is not necessary for these particular prizes.

Bring Your Team Together with Unique Challenge Coins

Custom challenge coins are unique and can be used for a multitude of things.

Whether you wish to improve your employees’ morale or whether you simply wish to reward your team’s excellent work together, these coins make for a great prize for your company to present.

With our help, we can get you set up with a custom design that will last for a long time to come.