11 of the Most Rare Military Challenge Coins Ever Given

Want to take a look at some of the most rare military challenge coins ever given? We’ll show you in this guide.

The challenge coins also play a significant role in their social lives after service duty. They’re given by high-ranking officers to the participating members of a specific mission. The medallions are also exchanged between officers to commemorate non-military events.

The first coin piece dates back to World War 1. An American prisoner of war escaped from the Germans’ custody into the hands of the French military. The French were about to execute him assuming he was German.

He showed them a pressed bronze coin. The French recognized the engravings and spared the American pilot’s life. Active and retired members of the armed forces still challenge each other with coins in drinking bars today.

American soldiers would carry live bullets to bullet-clubs in Vietnam. The practice spread to their fellow service members. They would challenge for free rounds by slamming down ammunition on the bar table.

• The coins are collector’s items. You can find rare gold coins as well as cheap brass and zinc coins in a military supply or flea market. Rare and expensive coins earn premiums to the collector

• There are always opportunities to present your coin. These include identification, during drinking games, and to boost morale

• Coins are used as a tool for recruitment into the military

• Most presidents have a unique military challenge coin

• They’re for remembrance. People hold coins to remind them of lost battleships or servicemen

• They deepen the feeling of comradeship and solidarity

• They inspire and boost morale

• They’re for motivation on special occasions

The following are the best-designed military challenge coins; 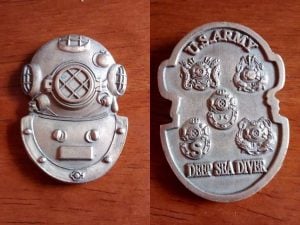 The army diver coin is cut into an elegant shape. The coin contains different diver badges that identify the holder. The US Army Diver coin calls for even more significant diving achievements.

Navy Chief Petty Officers use it to commemorate their acceptance into the chief petty officer mess hall. The men were accepted on Friday the 13th, hence the coin name.

The coin spots the flag of the National League of POW/MIA and barbed wire. The flag represents the sanctity of life for prisoners of war. The crossed rifles is an appeal from the prisoners to be sent back to their home countries.

The coin features a basic design. The coin is easily identifiable. People can tell that the coin-bearer has met one of the honored service members.

The military coins are iconic, and they weigh light. There’s a space on the edge of the coin where you can engrave a phrase. The poker chip coin is common in the Marine Corps School of Infantry.

The coin spots an impressive cut laced with a trailing gold chain. The coin is given by the Master Chief Petty Officer of the Navy Rick West.

The Airborne infantry unit is more aggressive than the Marine Corps and Army. The coin symbolizes the infantry job and the 173rd Airborne Brigade.

The design is common. The military challenge coin is comical. It allows the holder to speak proudly of their former duties in service.

You can customize it by changing to your preferred location.

The coin holds a record of the hull numbers of lost ships. The Silent Service guards all the seas in the world 24/7.

The Mickey Mouse Challenge Coin is a copyrighted disc that is a bit comical. The Naval Air Warfare Center issue is different from other coins which represent violence and cut in the adult world. The coin is a reminder to take a 40-minute drive to Walt Disney World.

Since Bill Clinton, presidents give custom coins to military personnel, wounded soldiers and their families. The challenge coins are transferred discretely and with honor.

Challenge coins today go beyond ranks and missions in the military. Guests to the White House and foreign dignitaries receive minted coins as tokens of respect and hospitality.

Other coins include Tickets for sailors and the Clear Challenge Coin.

The artists who mint the challenge coins often have a background in the military. They understand military slang and the culture of service in the Armed Forces. That’s why it’s easy for them to develop custom challenge coins on special order.

For more tips and information, please explore the other sections of our blog.

Get Showcased
Get Your Free Quote

Heather studied business and technology at Texas State University and has been with Custom Challenge Coins for over 4 years and counting. :) When she is not managing the technical sides of Custom Challenge Coins she is writing informational articles and posting cool pictures of our coins. If you would like your coin order that we manufactured to be featured on our website please reach out to sales@customchallengecoins.net View all posts by Custom Coin Blogger